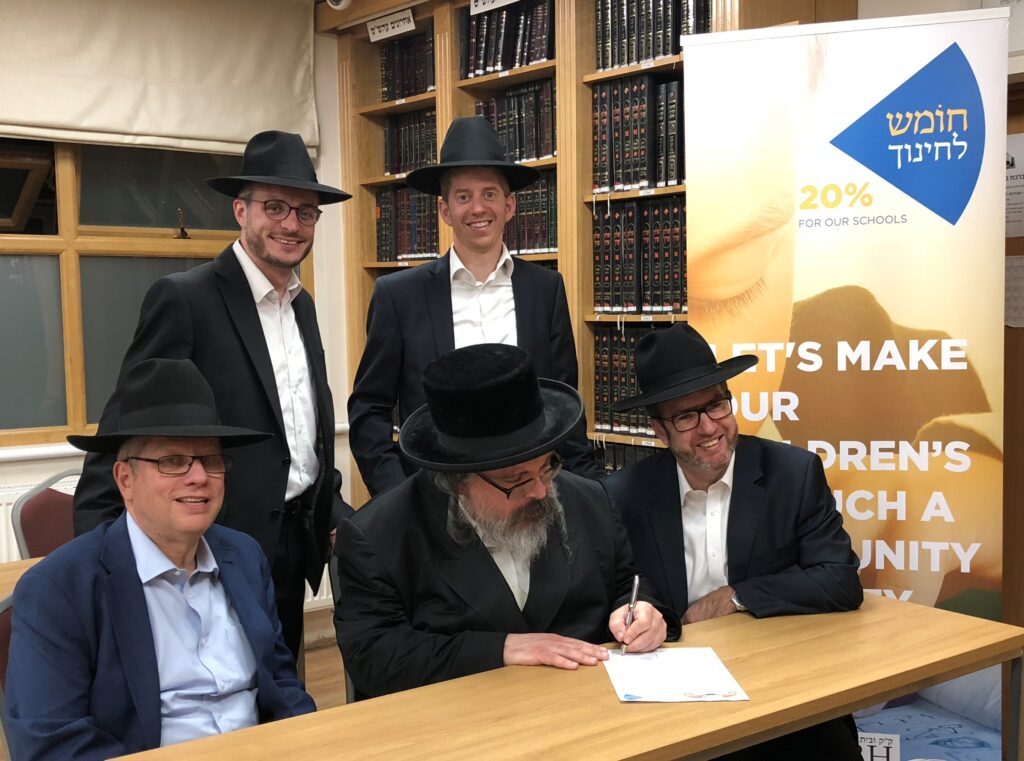 Initiated by Golders Green Beth Hamedrash, and joined in the past year by Hendon Adass and Beis Yisroel (Dayan Ehrentreu), the Beis Hamedrash Beis Shmuel is the fourth shul to join, and as one of the founding NW London Kehillohs it will substantially strengthen the communal initiative.

Early this year, £156,600 was distributed by Chomesh L’Chinuch to 22 local schools, with funds raised from GGBH and also for a few months from Hendon Adass members. Chomesh L’Chinuch is a shul-based project whereby shul members are encouraged to prioritise and allocate one-fifth (a ‘chomesh’) of their tzedokoh distributions to local schools attended by the children and grandchildren of their shul.

In an emotional drosho, Rav Moshe shlitoh, Rov of Beis Hamedrash Beis Shmuel, highlighted the unfortunate fact that every local jewish school is running at a significant deficit. However, our NW London community is generous and certainly able to afford eliminate the collective shortfalls, if the tzedokah allocations are prioritised accordingly. He explained that there is both a Halachic and ethical responsibility of each member to support the kehilloh’s local schools. His guidance referenced Shulchan Aruch Choshen Mishpot (163:3) and Yoreh Deah (245:7)  which details the need for everyone in a community to support the essential communal infrastructure, specifically including schools and mikvo’os.

He reiterated that members are required to pay school fees on time and not ignore or belittle the school governors who help collect the fees. In addition grandparents should prioritise their grandchildren education and their costs, ahead of other tzedokohs. Finally, he mentioned, that the Kehilloh is fortunate and blessed to have many ‘baalei tzedokoh’ who are able to donate generously. He urged every single member to allocate at least 20% of their own annual tzedokoh amounts to our local Jewish schools, whatever the amount. He added that we should be supporting all our local schools not only the only the ones which we have a close connection to.

Rav Moshe concluded his drosho, in a very personal manner, by informing his Kehilloh, that his father, Rav Elchonon ztl, was hugely involved in setting up and supporting the NW London schools and would walk the streets night and day, come wind or rain to help secure the finance necessary. In addition, Rav Moshe mentioned that Rav Elchonon ztl fully supported and in fact signed the Chomesh L’Chinuch announcement some years ago, together with other senior Rabbonim in the area. Therefore Rav Moshe, implored his Kehilloh to adopt the Chomesh L’Chinuch and for all the members to allocate their 20%”

Mr Eli Katz, joint founder of Chomesh L’Chinuch, was invited to speak to the Kehilloh and he delivered a powerful and comprehensive drosho. He explained in detail the financial crisis affecting all our schools, state-funded or private, primary or grammar, boys or girls, as well as the severe impact on our childrens’ chinuch and how the Chomesh L’Chinuch program addresses this crisis. In order to deliver a first class and essential Kodesh curriculum for the chinuch of all our children – the future of our Kehilloh –  we need to ensure the schools are fully supported by the Kehilloh, especially with the grave challenges from the secular world surrounding us.

He added that ”We are delighted that another one of the founding Kehillohs in NW London has recognised the need for a communal solution to the communal educational challenge. Rav Elchonon ztl was a major supporter of Schools in general and Chomesh L’Chinuch specifically. Rav Moshe’s own personal involvement with Chomesh L’Chinuch is a testament to the level of responsibility that the Rav and his Kehilloh likewise have. Many kehillohs have already reached out to us to discuss joining and we are in active planning phase for additional Kehillohs in the near future“. Any shul interested in launching Chomesh L’Chinuch should contact [email protected] .

Mr Sylvain Klein, trustee of Beis Hamedrash Beis Shmuel has written to all members encouraging them to sign up to this initiative. He noted ‘Beis Shmuel is proud to join Chomesh L’Chinuch – to help support the most vital of our communal institutions – our schools. As a well established and generous kehilloh, the Rov has highlighted that we have an important responsibility to help our local schools. Many of our members are already generous supporters of our local schools and we hope the entire kehilloh will sign-up to the BHBS Chomesh L’Chinuch”.

A number of highly respected BHBS members, Mr Danny Binstock, Mr Shlomie Stimler and Mr Pini Strom, are leading the committee to spearhead the campaign in the kehilloh to explain and encourage members to sign up. They added, “A key factor of the Chomesh L’Chinuch initiative, is that everyone in the kehilloh can participate. This creates a stronger sense of giving as a community in the support of our community’s schools”.

Already burdened with a substantial annual shortfall, our schools’ financial situation is worsening due to a combination of slashed government real-terms funding and running beyond maximum capacity. Furthermore, there are increased costs of Ofsted compliance and additional indirect payroll costs. These factors risk staff redundancies and reductions in the quality of Chinuch which our children will receive.